The Ultimate Hair.com Guide To Surviving Festival Season—Good Hair And All

Is that harsh? Sure—especially since Festival Season is also where great friends, iconic musicians, and epic parties bloom like Palm Springs cacti. But though you might be having the time of your life (or at least of your social media feed), your hair will need some extra convincing. That’s because the combination of constant sunlight, extreme temperatures, desert dust, and pool party chlorine can parch and fray your carefully-tended Coachella hair, whether your favor dark brown hair or something more vibrant.

To avoid that fate (and look suitably worthy of a music video dreamscape), we called Jennifer Gillis, whose expertise as a Shu Uemura Art of Hair educator extends to her work as artistic director of New Orleans’ H2O salon, and who serves tons of festivalgoers worldwide. Here’s her take on Festival Hairstyles, including what looks good, what lasts for 2+ days, and what your hair needs to fight breakage and fading during the annual marathon of concert hopping, good vibes and badly-needed SPF.

If you want a hairstyle that’s the least amount of maintenance and the most mileage, I’d suggest a braid and unless your friends are professional-level braiders, you want to go to a salon to get it done by someone who specializes in braids. It’ll last longer—like two or three days, if it’s done right—and also be done with the right products, and with respect to your hair’s natural strength and texture. 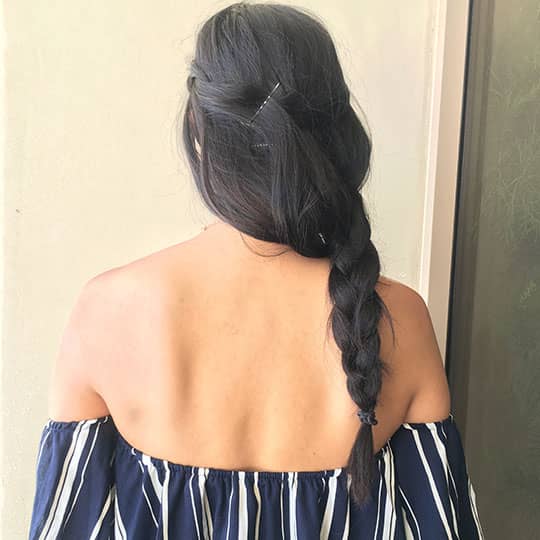 “No matter your hair type, a fishtail braid or a traditional French braid is the most durable,” Gillis says. “Even if your French braid goes up at the sides and then lets your hair fall down at the middle, in a half-up / half-down style, that’s great. Then on day two, you can pull the hair up at the back, or even braid it yourself.”

Good news for curly, kinky, or coarse hair: you’ve got more versatility and options when it comes to festival braids. “You should never smooth your hair out before braiding!” says GILLIS. “The natural texture of your hair has amazing grip and helps the style last longer. It also means you can do other braids, like a two-strand twist or a waterfall braid, that would probably fall out after a day with very straight hair.” 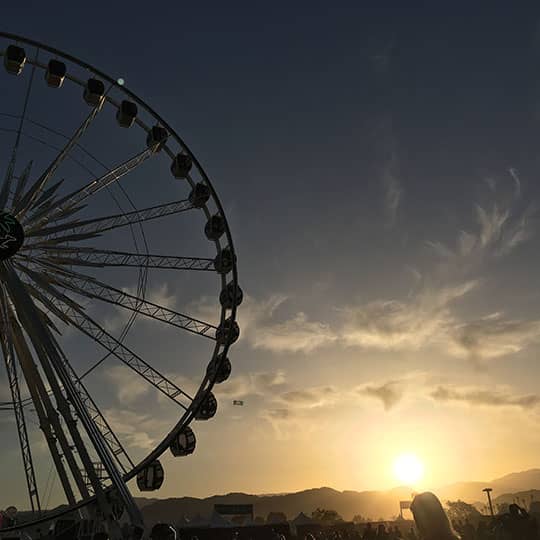 “If I’m going to a festival and I have a backpack, I would throw a satin pillowcase in there because it’s not going to weigh anything,” says Gillis, adding that if you’re camping out at Glastonbury, you can even put the pillowcase around your backpack or jacket and sleep on it as your actual pillow. (“I think about this a lot,” she laughs, “Because people always say they can’t bring a whole pillow, and that’s their excuse for not sleeping on something that actually helps their hair. I say, there’s no real excuse.”) 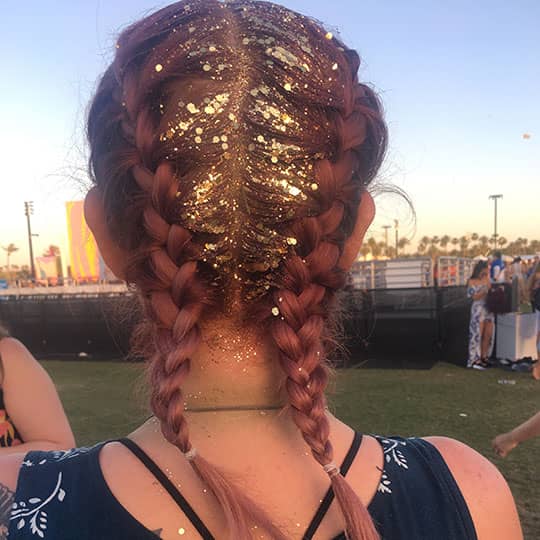 “If you want more texture, there’s a spray called Shu Uemura Art of Hair Texture Wave that I love, because it’ll give the hair some grit and help hold it in place and also look a little cooler, a little more romantic, less shiny. If instead you want that shiny finish, and you want your little fuzzy hairs and baby hairs to lay straight down, try Wonder Worker Blow Dry Primer. It’ll even give your braid a wet look, if that’s what you want. And if your hair isn’t thick enough for the kind of braid you want, you might want to add some Volume Maker, which is exactly what it sounds like. For slippery hair, which is thin and straight, that can make a big difference, especially in next-day styling.” Speaking of next-day styling, Gillis recommends a hair oil like Essence Absolue to reshape strands that might be bent out of shape after sleep. “If your ends are crunchy when you wake up, it’ll can help refresh them.” 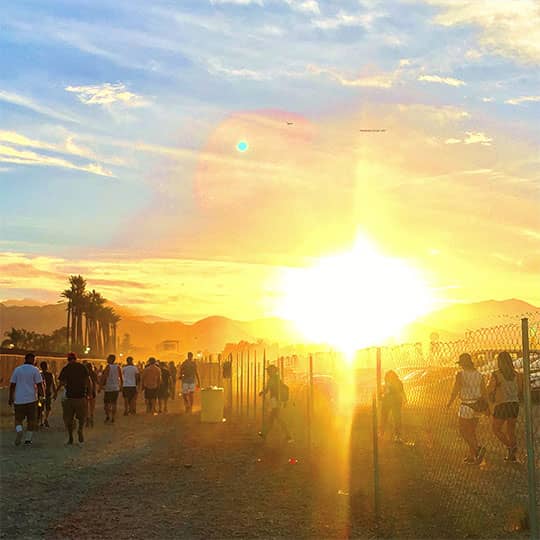 What About the Pool?

Festival Season dictates at least 30% of all partygoers must jump into a pool fully-clothed before 2am. It’s just the law of nature. But if you’re one of those making a splash, can your braid be saved? “I think it can be!” says Gillis. “Every situation is different, but if the top half stays intact, you can release the bottom half and comb through with your fingers before it air-dries. Then you can pull it into a ponytail so it becomes part of the braid, or just leave it down.”


What About Day Three?

“When you’re ready to take out your braid, probably on the last morning of the festival, spray your hair with a moisturizer like Wonder Worker first, then let it out of the braid. You’ll probably get some really great beachy waves. You can keep them as-is, or add a little more spray or even water, then run your hands through your hair and scrunch it like it’s 1984. Take advantage of the texture the braid has given you and just go for it.” 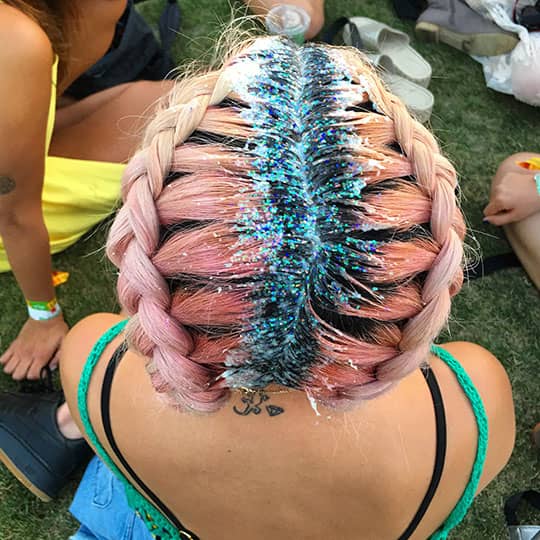 Now that flower crowns are wedding de rigeur, Gillis suggests skipping any floral arrangements and going instead for a glitterage effect. “This might sound crazy, but if you really want to go for it, I would suggest taking a gel with you. Put it in a tiny container, then get some sequins at a craft store and mix them together. You want to paint the mixture along your part. It’ll dry like that and stay in your hair, while also helping to keep the braid totally intact. Also, if you’re on day two and your scalp is getting a little greasy, that’s an easy temporary fix.”

Leave It All Behind

At the end of your festival adventure, you can take an aspirin, chug some iced coffee, and slip into bed for some Netflix-and-Recovery. Your hair deserves the same chill time, including a hair mask that revives and mends hair strands after a few days of intense heat, sunlight, dirt, glitter, and possibly chlorine. Gillis recommends giving yourself a long shampoo with a moisturizing and strengthening formula, then a hair mask like Ultimate Reset. “You can sleep in it,” she says, “or if you’re going straight home, put it on right out of the shower, then pull your hair into a gentle braid or low bun and keep it in during the car ride or plane ride home. Just let it sit and rest for a while—basically, the same thing you’re going to do yourself.”

Color Toning Shampoo 101: How To Use It And 9 Formulas To Try