Going Gray In My Teens And My Path To Acceptance

“Your hair is so cool!” I hear from a stranger. It’s another compliment added to the series of (backhanded) compliments I’ve received since I let my hair grow out gray.

“Thanks! It’s natural!” I reply awkwardly.

“Oh,” they say, seemingly disappointed that I didn’t make my hair gray by choice.

But, here’s the thing: it was a choice—kind of. Letting my hair grow out gray was not a decision that came lightly. In fact, it took more than two decades for me to be comfortable with the way my hair is now. And, when I finally did, the timing was right when society decided that the lack of pigmentation in my hair strands was “cool,” “trendy,” and “fashionable.”

But, the thing with trends is that, well, they are just trends. They exist for a bit of time, and then something else replaces it, designating the predecessor as “out of style.” Leaving me to wonder, how long would it take before my hair is no longer considered “on-trend?”

Deciding to grow gray was a hard choice for me and the process was equally hard, even as magazines had models with gray hair on the cover. But I wouldn’t have it any other way.

So, if you’re thinking of letting your gray grow, too, I hope my story will help you find the confidence to do it, whether gray hair is still trendy or not when you read this. 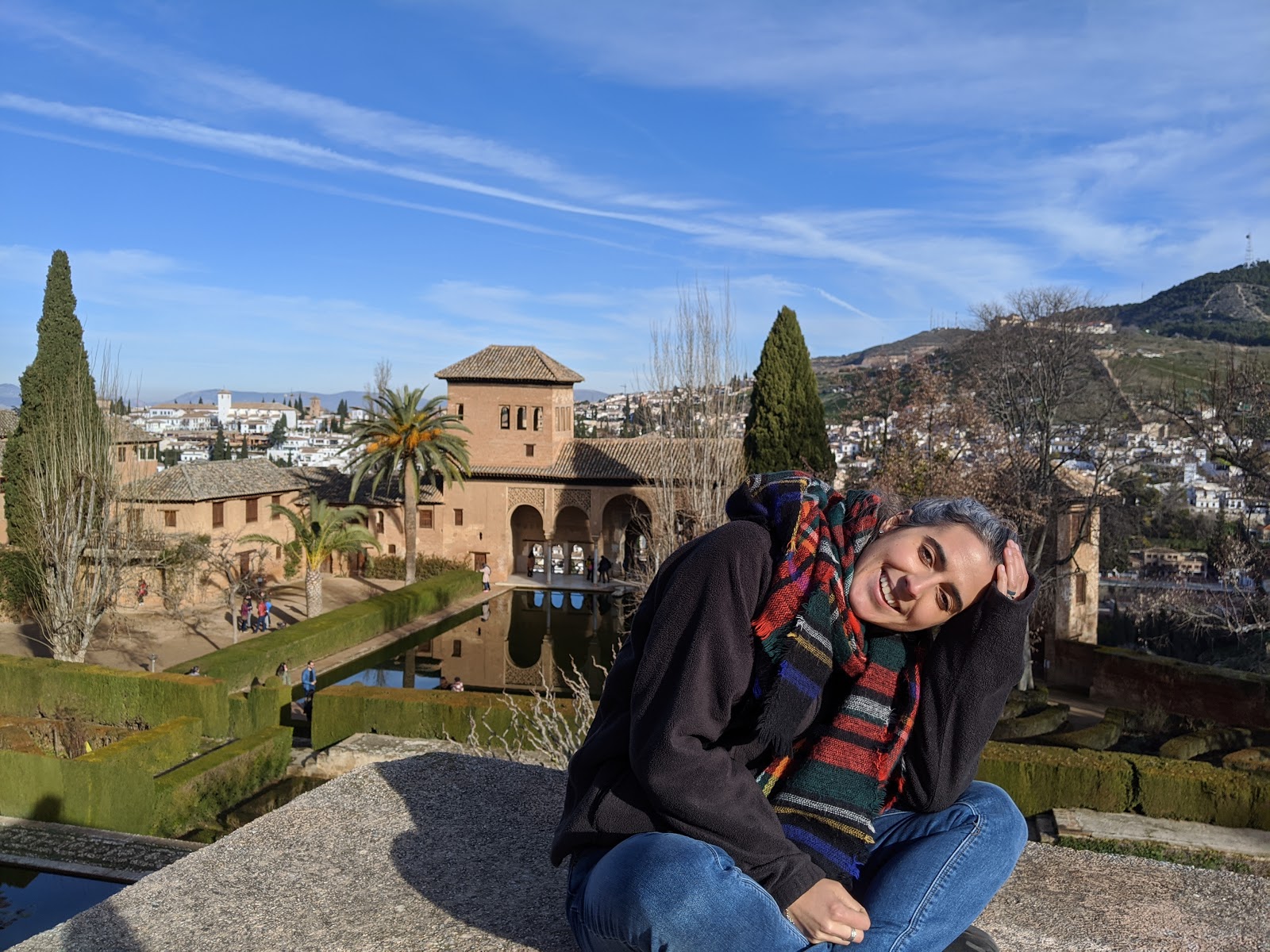 Going Gray in In My Early Teens

When I was in seventh grade, after several years of health issues, I took a medication that caused my hair to fall out of my head in massive clumps. I went off the medicine, but the damage had been done. My changing hair, combined with puberty, left me feeling like I didn’t know who I was anymore.

“Hana, there’s another one!” My friends said as they peered over my head in eighth grade, pulling out each gray strand one by one. I was turning gray, and I was 14 years old. Maybe it was the medicine I had been on, too, or maybe it was just genetics. Maybe it was both. It didn’t really matter. I was the only one I knew with gray hair.

So, as I entered high school, I began dying my hair. At first, I only had to do it every six weeks or so. But, towards the end of high school, it was every few weeks. I was hyper-vigilant. Anytime I saw even the slightest strand come through (which is noticeable on jet black hair), I’d dye it. I experimented with bleaching, too, just to see if it would help. It didn’t. I continued this for another decade, and it took control of my life, my confidence, and my beauty habits. 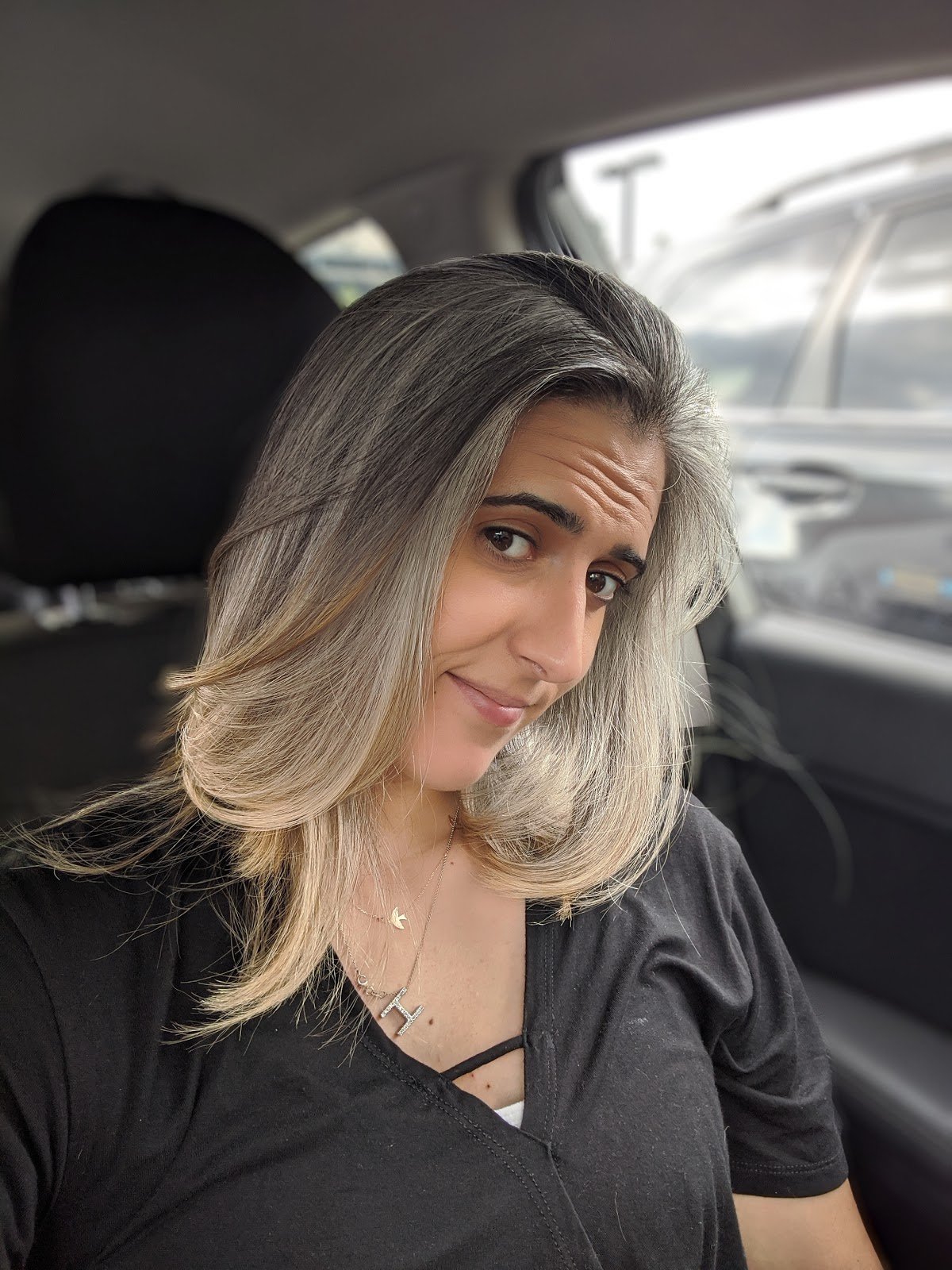 Growing Out My Gray Hair

Fast-forward ten years. I was 25-years old, living in Mexico with my now-husband—who has been kind enough over the years to help me dye the grays in the back of my head (or point out when they started coming through). We were about to leave on a trip to India, and as usual, I packed the dyes with me. I had to bring two for our month-long trip (yes, they sold dye in India, but I felt more comfortable knowing it was in my bag). As I packed, though, something hit me. Suddenly, the idea of having to pack dye with me on a backpacking trip struck a chord. In many ways, traveling is supposed to make you feel free. Letting my hair woes impact that seemed to be counterproductive.

So, I said to myself (and to my husband to make sure someone would hold me accountable). “I’m done. After this trip, I’m letting the gray grow.”

When I returned from India, I talked to some friends about my plans to get some suggestions. Because my hair was so black, growing it in gray would definitely get me a lot of (extra) attention, and I should consider finding a way to lighten my hair to help the gray blend into the rest of my hair as it grew.

With my Spanish vocabulary in the hair and beauty department seriously lacking, I tried to explain to my hairdresser what I wanted. We began lifting my black hair, month after month, until my hair became tri-colored—gray, black, blonde—even green and purple in some parts. It became dry and brittle. Not only did I have to get used to a new color, but I also had to get used to my hair feeling different.

When I visited the States at the end of 2019—right before my wedding—my hair had been growing out for about two years. But, it was severely damaged and discolored. However, you could see the potential there. The gray itself was growing out nicely. It was almost platinum, smooth, and shiny. The process had been long, but I could tell it was worth it.

It’s been almost three years now, and I moved back to the States this year after seven years abroad. I changed a lot in that time. But, when I look at pictures of my black hair, I don’t miss it. All I think about is how clear it was that I was dying my hair so much to cover something up, even though my “original” hair was black. It looked fake. It wasn’t me.

Now, I see pictures of myself, and I feel good. Sometimes I do wonder if I look “old,” but most of the time, people close to me give me praise. Not everyone, of course. Even my own mother had her judgments (but she since decided to let hers grow out, too.) I also had a hairdresser a few months ago who said, “Do you want my opinion? You’re too young and beautiful to have gray hair.” That hurt, but I shrugged it off.

Nearly everyone will go gray eventually, whether they like it or not. But, for those who go gray prematurely, or those who are “at that age” but are just not quite ready, we can only choose to stop coloring our hair and let the gray go. (Cue my rendition “Let it Growwww, Let it Growww!”) The hardest thing about growing your hair out gray is once you start, you have to stay committed. It takes so long to grow out that if you change your mind in between, you’d have to start all over again if you later change your mind again.

Tips for Growing Out Gray Hair

As if women don’t already get judged enough for their appearance, deciding to let your hair go gray at any point in life is a major transition. So, if you decide to grow your hair out gray, here’s what I want you to know. First, you’re beautiful and brave. Second, people may or may not be nice about it, so be prepared.

But what’s most important is that you feel good about it. Here’s what I’d recommend, based on my experience:

My hair is almost all the way grown out - I probably need one more haircut, and it will all be gray. After that, I can do more styling or additional toners if I choose to. My hair was gray for my wedding, and it will be gray from here on out. I am “only” 29-years old, but I am fully and unapologetically gray.