Threaded Eyebrows: Everything You Need To Know About This Salon Technique

In the world of eyebrow grooming, waxing reigns supreme. Despite the numerous horror stories about hot wax burning skin and accidental over waxing, it is still the preferred eyebrow grooming method for many women. If the thought of another wax appointment gone awry sends chills down your spine, we’re here to let you know there’s another way: threaded eyebrows.

Eyebrow threading has been around for centuries, but for some reason, it hasn’t gained the same following as waxing. Well, that all changes today. We sat down with Shobha, the founder of the Shobha threading empire in New York City to get the scoop on everything you’ve ever wanted to know about threading. Whether you’re looking to tame bushy dark brown eyebrows or simply sculpt your ash blonde brows, we’ve got you covered with everything you need to know about threaded eyebrows. 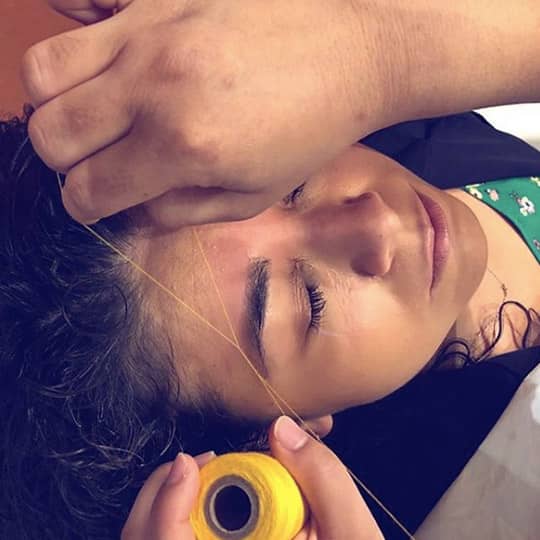 Threading is a method in which a thin piece of cotton thread is twisted into the shape of a mini lasso and pulled along areas of unwanted hair, lifting and removing the hair follicle directly from the root.

“Threading is by far the gentlest form of hair removal and dates back centuries with its origins in Arabia and South Asia,” Shobha says.

Threading may not be as popular as waxing in America, but in other parts of the world, it is a skill that is often learned at home.

“In South Asia, most people learn how to thread from other family members, and some learn from just working in salons,” Shobha explains. “Some have also gone to school. Threading is quite prevalent in the Middle East and South Asia, so you can learn it in any beauty school.” 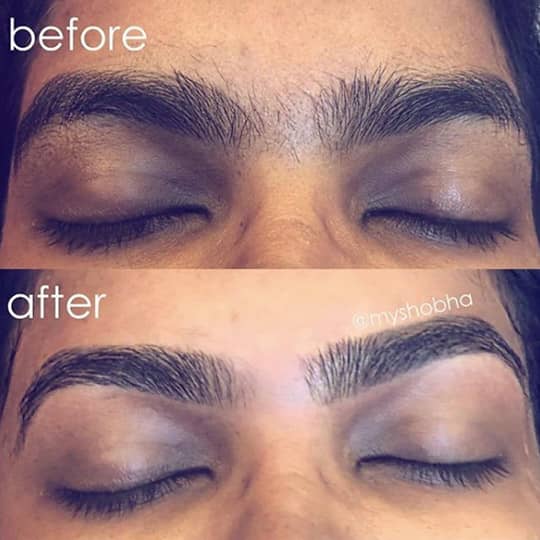 What are the benefits of threading?

If you’ve had your eyebrows waxed, chances are good you’re well aware of the potential downsides. While a skilled waxer can create flawless sculpted brows, there’s no way around the painful skin tugging, redness, and clogged pores associated with wax. Threading, on the other hand, can produce the same impeccable results without the dreaded side effects.

Unlike waxing, threading only pulls on the unwanted hair—not the delicate skin surrounding your eyebrows. That means not only is threading typically less painful than waxing, but also you won’t experience the same itching and redness. Threading is also great for people who have acne prone skin or those who tend to break out after a wax appointment, as there is nothing that will clog or disturb your pores. Furthermore, because each of the hairs is pulled from the follicle individually, threading is very precise—meaning you won’t end up with pencil thin eyebrows (unless of course, that’s what you’re into). Shobha’s favorite benefit, however, is how threading can protect your skin for years to come.

“Wrinkle prevention! Unlike waxing that can tug, pull, stretch, and even remove the delicate skin on your face, which eventually facilitate the development of wrinkles, threading requires minimal contact with the skin,” she says. 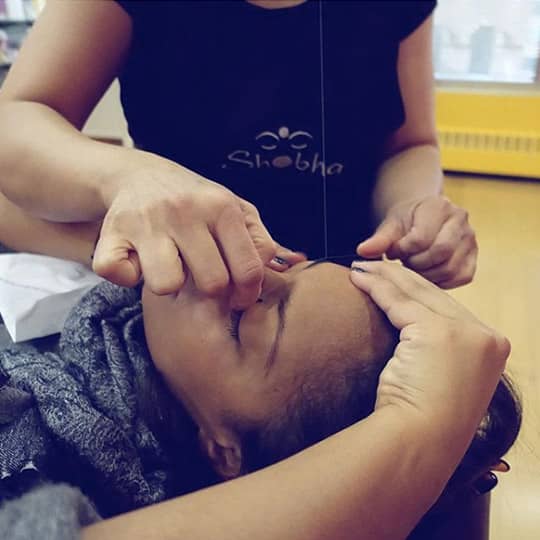 How do you maintain threaded eyebrows?

While threading is a much more delicate process than waxing, that doesn’t mean you won’t experience any discomfort.

“Everyone has a different level of skin sensitivity,” Shobha explains. “If you find that you do have very sensitive skin, you will probably experience some redness after threading, but it usually subsides within an hour.”

If you want to get rid of the redness ASAP or it lasts more than an hour, Shobha recommends applying a hydrocortisone cream or ice to the area after the treatment to soothe the skin and help reduce redness.

While threading may make you eyebrow grooming routine much more bearable, one thing it won’t do it change how often you have to head back to your brow guru.

“Since threading removes each hair from the root, it lasts just as long as waxing,” Shobha explains. “Of course, re-growth depends on how fast your hair grows but generally our threading clients come, on average, every two to five weeks.”

If you’re in the New York area and want to get your eyebrows threaded, you can make an appointment at Shobha by calling 877-831-2847 or visiting www.myshobha.com.

You may also like: Eyebrow Microblading: Should You Try It?

You may also like: How Tweezing Unwanted Hair Can Damage Your Skin