What Hair Salons Will Look Like In A Post-Covid World, According To Hairstylists

When businesses closed in March 2020, one of the first industries to take a huge hit was hair salons and spas. With services such as hair cutting, styling, and coloring being dependent on close human interaction, there was no way to safely accept customers with so many unknowns at the time.

“Everybody wanted money now and nobody knew what was going to happen,” says Gina Bianca, owner of The Network Salon. “I was terrified to ask my stylists for rent because one, I didn’t want them to be mad at me, and two, I didn’t know how long this was going to last.”

Located in Plantsville, Connecticut, The Network Salon is both a rental salon and education hub for stylists. Bianca had 16 stylists working with her before everything shut down. Once the stay at home orders went into place, she had to close the salon, refund tickets for a 2020 hair educational tour she planned, and figure out the best way to help her staff.

“They had no money, nobody was expecting this. I didn't charge rent, so financially I was there for [my employees],” she says. “I had to refund tickets and try to get everything online.”

Despite the salon and spa industry bringing in billions of dollars in sales in the U.S. (a report done by the Professional Beauty Association showed that it brought in over $57 billion in 2019), salon workers’ salaries vary and are oftentimes underpaid. A survey done by Behindthechair.com showed that about 72 percent of hair salon workers live paycheck-to-paycheck or have about a month’s worth of savings. In the same survey, 23 percent had no health insurance. Closing down business created a dire financial situation.

A little cliché, but staying positive is the only thing hairstylists—or anyone really—could do.

“COVID gave us time to think. We evaluated what we did as a company and how we could do things better,” says director of culture development at Kenneth’s Salons and Day Spas Tony Anders. “We saw that people needed both emotional and financial security and would come back from the shutdown as transformed people.”

Anders adds that while Kenneth Salon and Day Spa is an employee ownership model to assist with financial burdens, the uncertainty still made people feel uneasy. But because he has worked as a therapist and counselor for 10 years, he was able to use those skills to really be there for employees at the salon.

Other hairstylists took it upon themselves to sharpen their skills while salons closed, spending time on education and investing in other interests to figure out how to create success for themselves in the future.

“When you’re so busy behind the chair, you can’t really fit in classes like you normally would or you can’t stay on top of finances and speak with accountants,” Campbell says. “So it was like a setup for a new beginning: I’m coming back refreshed, reeducated, and ready to hit the pavement running.”

He also says it put a lot of things in perspective; the slower pace was needed to process what was happening in the world and made him and other stylists look at what brands they’re working with.

“With other things that were going on in the world, I feel like hairstylists got to see brands inside out and connect [with them],” he says. “With the Black Lives Matter movement and things of that nature, we know a lot of brands who have stepped to the forefront.”

Bianca made it a priority to take care of her employees, even if it was at the cost of her financial—and mental—well-being. She drained her savings so that her staff didn’t have to pay rent during the shutdown.

“COVID threw me over the edge,” she says. “Nothing I did made an impact in what I wanted and that feeling of not being in control...many salon owners and hairstylists struggle with codependency and workaholism. Many of them have past traumas;  artists and creatives, a lot of us are kind of nutty and I'm nutty.”

Despite the setback, she came out stronger on the other side.

“Life is about what you focus on and then the meaning you attach to everyday things,” she says. “Some salon owners will walk in and notice everything that’s wrong; that used to be me. [Now] I really try to focus on what’s right...we’re so lucky to have what we have.” 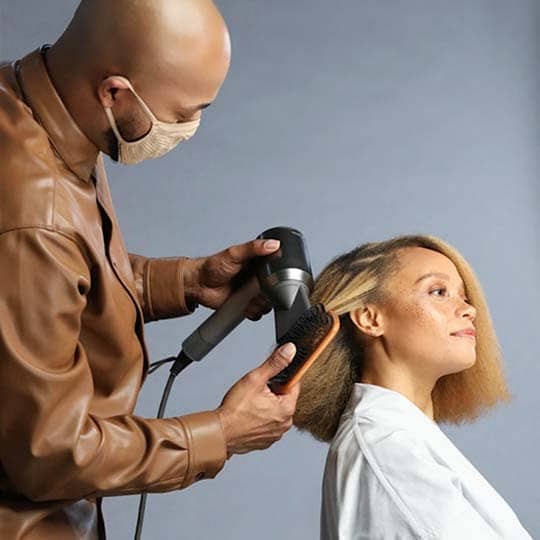 Salons were quick to implement safety guidelines. Soon, it easily became part of the daily routine. Anders said standard spacing, sanitizing, temperature checks, and keeping the salon at a minimum capacity were just some of the ways his salon kept employees and customers safe. Everyone was masked up, which took the most getting used to.

“The masks make the human experience a challenge,” he says. “Aside from getting in the way of cuts, color, and other technical services (which we can adapt to), we find the ability to see smiles [and] one’s face shape does pose a challenge.”

It’s a minor challenge for the greater good of keeping everyone safe.

“We tried to reassure the staff that the clients who were actually taking the courage to come into the salons were choosing us and our services over fear at the moment,” he says. “But we must be overt in our protocols and to try to offer a safe emotional haven free of excess COVID speak.”

Mask mandates differ by state, but Bianca adds that as a salon owner, she made the decision to keep the masks on in the salon for employees and clients until it is ruled completely safe to no longer do so. She says she has one employee that still wears a mask outside and wants to make them as comfortable as possible. This creates trust from within the staff but also with customers.

Taking care of employees is a top priority for a lot of salons. Kenneth’s Salons and Day Spas also started an employee F.I.R.S.T.—an acronym that stands for Freedom, Inspiration, Retirement, Security, and Tenure — initiative to help employees navigate through this difficult time.

“The program emphasizes these categories and how one’s work and life experience will be improved and how the staff can have a part in the ongoing success of their company and their part in it,” he says. “Each facet provided its own initiative.”

He adds that the salon revamped its education curriculum to combine over four decades of skill sets, as well as adding new color lines, products, and services.

Looking to the future.

Anders, Bianca, and Campbell all say that business has been going well since states have started to re-open again.

“The salon is doing great,” says Bianca. “A lot of people came and rented at The Network. A lot of my old team [also] came back — I came home to a full salon.”

“I’m booked out for like a month and a half,” says Campbell. “So it really has been booming.” But despite all this, he says he doesn’t expect — or even want — to go back to old habits.

“The fact that I’m no longer overlapping clients or seeing two or three people at one time has really given me the opportunity to hone in on the experience [and] really connect with one client at a time,” he says. “It’s also given me the knowledge to be able to charge my worth.”

As for how they see salons running in the future, they see everyone thinking outside the box when it comes to customer care, protecting their business, and preserving their inner peace.

“Service will be a major influence on how we deliver what we do,” says Anders. “People found out they can go longer in between services, and some started doing certain hair and spa services at home. It is the human connection and relationships with the providers and companies that will bring people back. As an industry, we need to galvanize that connection if we are to rebuild and thrive.”

Campbell encourages hairstylists to work “beyond the aesthetic of [their] work.” He recommends not only working on skills you’ve learned at the salon but also expanding a portfolio on social media to connect with brands that align with the content you want to be making. “Learn how to create content, collect content, and brand it to tell the story you want,” he says.

While there is no way to fully prepare for a pandemic, being a good leader and showing good leadership will set an example for the rest of your salon to follow. The best way to be a good leader and provide the best service for your clients is to take care of yourself first.

“If the leader is hurting and puts on a fake smile and everything is okay, the team feels that and they put a big fake smile on and then we're all serving clients suffering [and] putting ourselves last,” says Bianca. “If the leader puts themself first and takes really good care of themselves, the team will have that same vibe.”

Interested in booking a salon appointment? Use our salon locator to book an appointment at a salon near you.