In the age of social media, nothing is sacred—especially not hair colors. While Instagram and Pinterest can be an excellent resource for ladies seeking fresh cuts and new hues, it’s disappointing to fall in love with a look only to have your stylist tell you it’s unrealistic.

While it may seem like every hair color you see online is doable, that’s not necessarily the case! Just the way Instagram influencers edit their thigh gaps and waists, hair professionals can use photo editing apps to tweak the lighting on their hair color images. As a salon expert, you may be more interested in heightening shadows to show off the multi-tonal brunette you just finished creating than ensuring your photo stay as true to reality as possible.

To ensure you know exactly how much technology can change the appearance of color from dark brown hair to pastel pink, we ran three separate photos through four of the most popular editing apps. We’ll also give you a few tips on how to ensure your dream color is actually an achievable goal.

This silky pink comes care of Dan Csicsai, Matrix artist and owner of Salon Glo. To create it, he used Matrix’s ColorSync Quartz Pink mixed with an undisclosed few other shades. While we don’t know if this image has already been edited, it looks like an icy pink to the naked eye.

To the 2,344 people who’d like the image at the time of publication, a pink like this is a dream color. But what happens when we filter it? 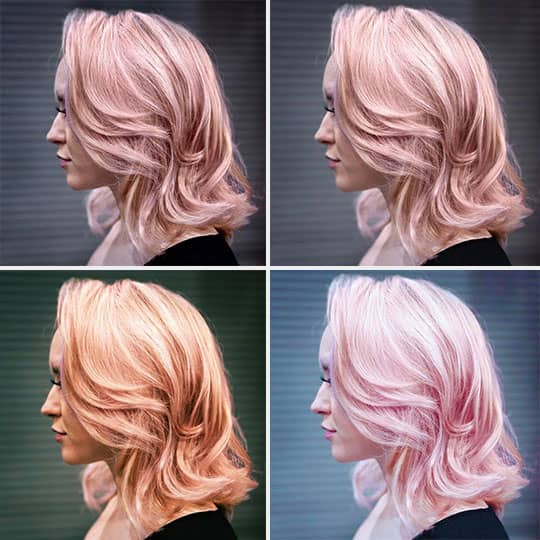 We first tweaked the photo using just the iPhone’s magic wand feature—one even the most amateur user probably takes advantage of. In this case, it enhanced the shadows on the color, making it look as if notes of nut brown were a part of the final color.

With almost 20,000 5-star reviews on the iTunes App Store, YouCam Perfect is an app that purportedly does everything from makeup to hair color. We stuck to the basics, filtering our pink hair image with the Auto Tone tool. Like the iPhone editor, it heightened shadows and created the illusion of more depth within the pink hair color.

FaceTune is one of the most well-known photo editing apps, probably because of its popularity among Instagram influencers. The app, which calls itself “the original selfie editor,” currently ranks number one in the iTunes app store Photo & Video category.

Although the options are virtually endless (dare we say overwhelming) for editing images within FaceTune, we took the path that was easiest to follow and opted for a preset lighting filter called Sunset. Designed to mimic the warm light of the golden hour, this filter brought out the peach and orange notes in Csicsai’s hair. If you hadn’t seen the original, you’d definitely think this was a photo of apricot blonde.

Our last editing stop was AirBrush, a popular app reviewed by more than 87,000 users. Here, we tried the Iceland filter over pink hair. It turned the photo extremely cool, which means the pink shows up as an icy, platinum-influenced pale shade.

Pale shades are easily influenced by filters—that much is clear. To see what editing apps would make of a more naturalistic color, we turned to blonde balayage. With a deep brown base and near-platinum ends, this hair look encompasses nearly every shade on the spectrum. What would filters do to it? 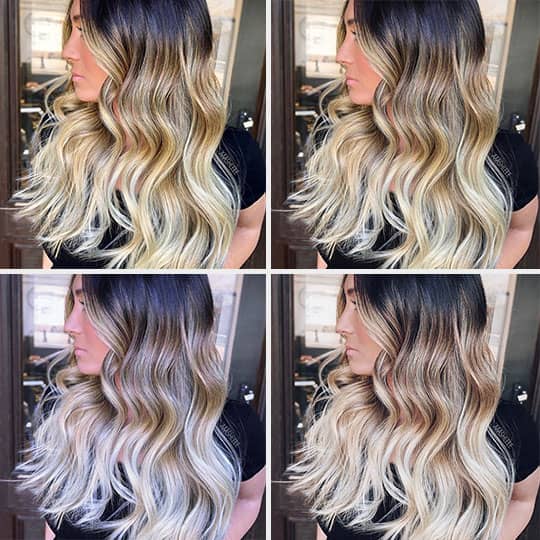 Phone cameras are all about achieving a natural finish, so it makes sense that the magic wand didn’t dramatically alter the look of this balayage. Notably, the blonde looks considerably warmer than in the original photo.

YouCam once again filtered the photo in a similar to way to the magic wand tool. The middle and ends of the hair color become a warm golden blonde, as opposed to the multidimensional shade in the original photo.

Of all the apps we tried on this balayage, FaceTune was the most striking. Although the original hair color contains some icy notes, the Cross B filter turned the ends silver with hints of blue. Anyone seeing this picture for the first time would be asking their stylist for a far more involved color than the artist originally created.

Like FaceTune, AirBrush took the cool route. Fresh, the filter we chose, pulled out silvery notes within the blonde balayage.

Since silver and gray are some of the most in-demand shade available in salons, so our final test involved silvery gray hair. Judging by the shifts in tone we saw on the other two shades, photo apps were likely to dramatically change this model’s hair color. 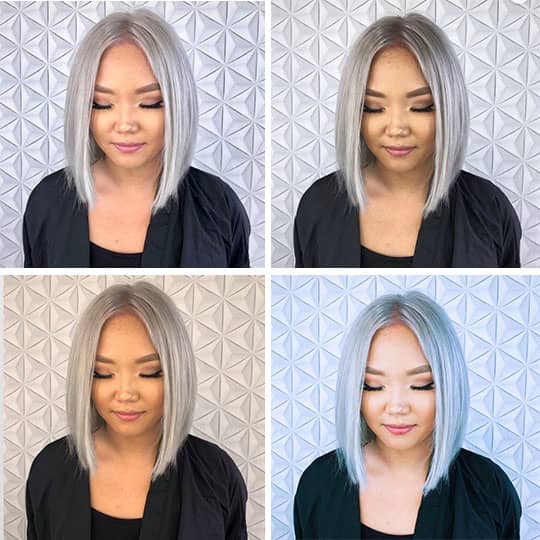 Right away, we noticed a major difference with the addition of the filter. The magic wand enhanced the contrast in the photo, which in turn created the illusion of a darker base to the silver shade. Looking at the photo, you might think Soung created silver highlights no top of a charcoal base instead of a full head of color.

The YouCam app only further adjusted the contrast on this photo, which left Soung’s color looking closer to slate than ever. The filter created the look of shadowed roots as well as thick dark streaks between bright silver pieces.

Finally, we arrived at our final filter: AirBrush’s Muse. Like Iceland, Muse amped up the contrast and tinged the entire photo blue. Instead of icy silver, we’re left with what looks like pastel blue hair.

Don’t believe everything you see online. If you find color inspiration on Instagram, feel free to drop the artist a comment or direct message asking how dramatically the photo was filtered before falling in love with it. When you bring images to your appointment, have an open discussion with your stylist about how long it will take to achieve the results in the photo.

The better everyone communicates, the more beautiful your hair color will turn out.

Interested in a hair color transformation? Use our salon locator to book an appointment with a stylist near you.