I Am More Than My Hair: How One Author Is Helping Bald Women Feel Beautiful

By Jelani Addams Rosa & Powered By L’Oreal Professional Products Division
Despite the fact that nearly 50 percent of women will deal with hair loss in their lifetime, it is still a topic that is barely spoken about in the beauty industry. While hair products hit the market every day that promise women thicker, fuller, longer hair, those ads sometimes feature women without a bald spot in sight. As a result, many women dealing with more severe types of hair loss often feel alone.

Alyscia Cunningham is an author, photographer, and filmmaker who never gave much thought to her hair. Whether she cut her dark brown hair or styled it in locs, she believed that it would always grow back—that is, until she met women who weren’t as fortunate.

Determined to bring more awareness to an issue that is more common than many of us believe, Cunningham set out to do what she does best: share their stories.

“For men, being bald is sexy, but for women it’s still taboo. You don’t really hear about it women losing their hair, you don’t see it in the media, but you see bald men all the time,” she says. “When you start to speak about things, it helps to shift people’s ideas.”

Unsure of how to even pronounce the word, Cunningham chalked up her bald spot to stress and didn’t give it a second thought. It wasn’t until she considered donating her long locks that she began to fully understand how difficult it can be to be a bald woman.

While promoting the publication of her first book “Feminine Transitions” in 2013, Cunningham learned about a non-profit organization raising money for women of color dealing with cancer. Through the organization, the author began to learn about the plight of women who lose their hair to cancer treatments. Cunningham had already been thinking about cutting off her waist-length locks and figured there was no better time for her big chop after spending time working closely with such resilient women.

Ever the storyteller, Cunningham began blogging about her “big chop” experience in hopes of connecting to a community of women who’d also cut their hair. While the natural hair movement encouraged people to embrace their coils and curls, it hadn’t yet come around to embracing the big chop. Instead of support, Cunningham was met with a slew of negative feedback from friends, family, and even strangers, condemning her for choosing to go nearly bald.

The author remembers the event, saying:

“I thought people would’ve been maybe a little bit more positive, but they were so concerned with me cutting my hair and how I would look. I kept hearing phrases like ‘your hair’s your beauty,’ and ‘women shouldn’t cut their hair.’ It really got me mad you know, to be honest. I was so upset about it.”

The more pushback Cunningham received for her personal choice to cut her hair, the more she thought about women who don’t have a choice to lose their hair. Any time someone tried to shame her for the decision to cut her hair, she asked them, “What would you tell your daughter if she involuntarily lost her hair? Would you tell her she was no longer beautiful?”

No one ever knew how to respond.

Cunningham began to realize bald women were not only unsupported but also largely invisible. Thus, Cunningham’s latest book “I Am More Than My Hair,” was born.

“I said to myself, I’m going to create something that showcases women who’ve lost their hair or bald women in general just to bring awareness because I think people live in a world where beauty has certain standards, and I wanted to break that mold,” she explains. 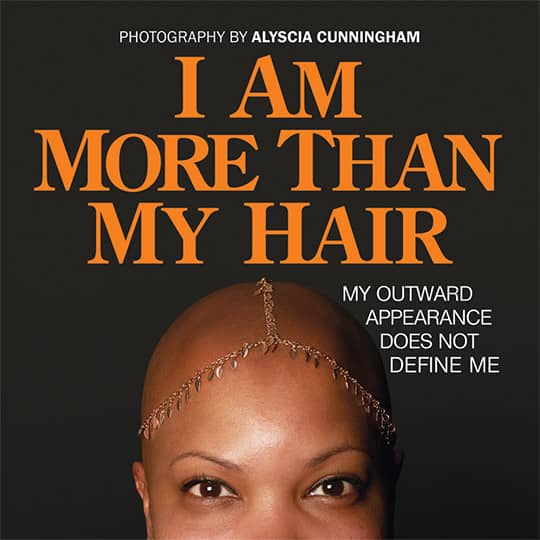 The Making Of “I Am Not My Hair”

Having first been inspired by cancer patients, Cunningham set out to connect with women through cancer organizations and immediately hit a roadblock because of their strict privacy policies. Feeling defeated, Cunningham considered scrapping the book altogether. It wasn’t until her friend suggested she reach out to alopecia organizations that the project really began to come together.

Despite having had her own brief encounter with alopecia just a few years earlier, Cunningham didn’t know much about the condition and set out to learn as much as she could. Once she had a better understanding of alopecia, she knew it was the perfect subject for “I Am More Than My Hair.”

Alopecia is simply the medical term for hair loss, but there are several common types of alopecia. Alopecia areata is sudden hair loss that often starts with one or more circular bald spots. Androgenetic alopecia, also known as male or female pattern hair loss, is a gradual hair loss that typically begins at the crown of your head and works its way outward. Telogen effluvium is a temporary hair loss brought on by stress or drastic changes in your body. It’s rare, but it is possible to lose all of the hair on your head called alopecia totalis, or your entire body called alopecia universalis.

Cunningham began to reach out to organizations like the National Alopecia Areata Foundation and Children’s Alopecia Project, which helped her get in contact with potential subjects. Word of the project quickly began to spread, and soon many of the cancer organizations that couldn’t originally help found ways to share information about her project on their social media platforms. It didn’t take long for the stories to come flooding in.

Although Cunningham's project had originally focused on hair loss related to cancer, it quickly expanded to include all kinds of loss. Cunningham welcomed women who'd lost their hair during chemotherapy, who'd had it fall out due to alopecia, and even those who'd shaved their hair in solidarity with sisters or friends.

Although Cunningham wanted to create a space where women with hair loss could feel unbeholden to society's standards, her mission was anything but easy. Her subjects might have been excited to participate in the project, but many of them were incredibly nervous. The vast majority of them had never been in public—let alone photographed—without their hair.

Cunningham knew it took incredible courage to remove their wigs and scarves, and did her best to make the women feel as comfortable as possible. Ultimately, the women pushed through because they believed the project was necessary.

“Everyone expressed how important this was to them. They said they wanted to be a part of the project because, at that point, there was no other project like this...I wanted the audience to know how you should treat people who may not look the same or different from what people consider to be the norm.” 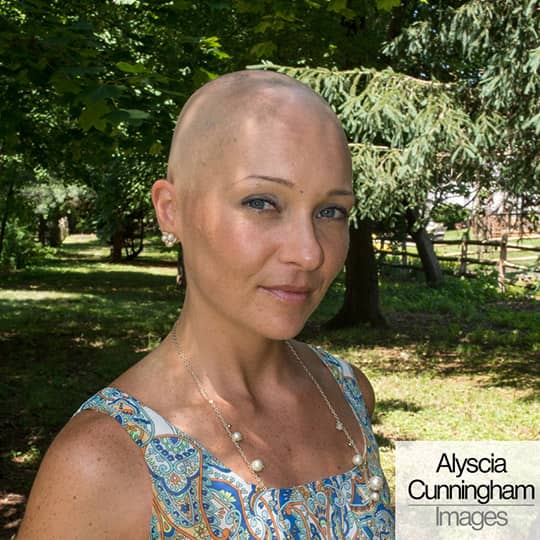 The Legacy Of “I Am More Than My Hair”

“I Am More Than My Hair,” which was published in July 2018, has proven to be a success in the hair loss community and created a space where women with all kinds of hair loss have a platform to talk about what hair loss means. More importantly, the photos helped many of the women feel beautiful for the first time since they lost their hair.

“It has been impactful not only to the women who participated but also the readers. I’m constantly getting positive feedback saying that they’re crying tears of joy,” Cunningham says. “It’s even been impactful for the participants’ friends and families who had never seen them without their hair because this was the first picture they ever took without a wig on.”

The impact of the “I Am More Than My Hair” project hasn't remained within the two covers, either. To date, it's inspired Cunningham to create an alopecia fundraiser, a fashion show with bald models, and a documentary inspired by the photography book. Cunningham currently fundraising for the documentary and she hopes to release it sometime next year.

“I believe that once people become aware of an issue, that they’ll maybe more polite and not do things like stare or point and laugh when they see another girl or women who are bald,” she says.

Ultimately, Cunningham hoped to start a conversation about alopecia so society would not only embrace bald women, but also to help anyone dealing with hair loss see their true beauty.

Buy Cunningham’s book “I Am More Than My Hair” on Amazon.com. Check out the trailer for the film version of “I Am Not My Hair” below and head to docsinprogress.org if you’d like to donate.

Interested in personalized advice about your hair? Use our salon locator to book an appointment with a stylist near you.