14 Chignon Hairstyles For Every Occasion

When it comes to hairdos that never go out of style, no list is complete without a mention of the chignon. The French name may sound fancy, but it just refers to a bun that’s loosely knotted or wrapped.

Although many chignons are of the stiff matrimonial variety, we love that the style can work for all occasions—weddings, sure, but also grocery trips and late brunches. No matter your texture, we’ve found a style to suit you.

As an added perk, these chignons are heat-free. Give your hair a holiday—it’s on us. 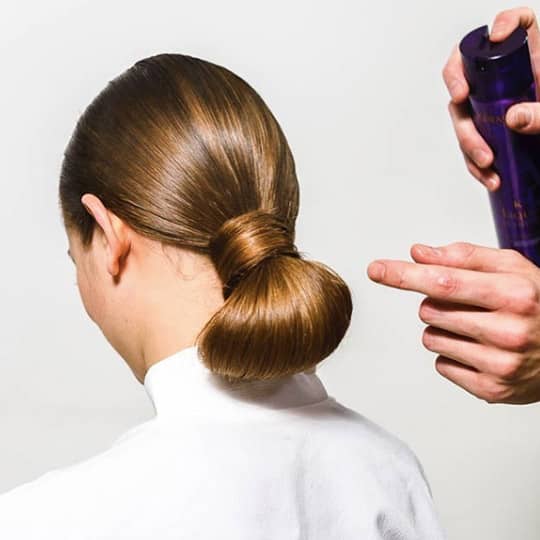 For a wedding, bridal shower, or upscale birthday party, give the wrapped chignon a shot. Divide your hair into three sections, creating the bun with the middle hair. Once that’s finished, wrap each of the side strands over and around the bun, successfully hiding the hairband from sight. 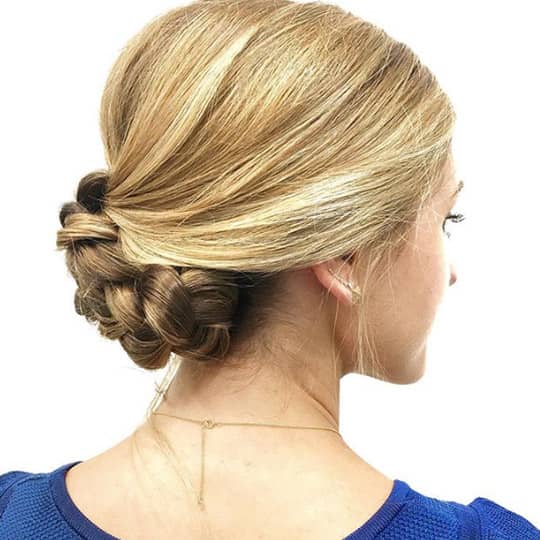 If you’re a long-maned lady who doesn’t always know how to deal with all that hair, the braided chignon is your new go-to for nights out and dinner dates. Start with two loosely braided pigtails secured with clear elastics, wrapping the two around each other before pinning into a bun. Just be sure to hide any loose ends from sight! 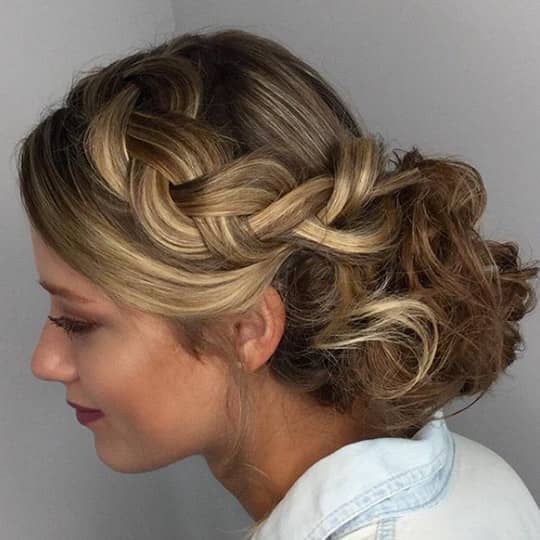 Here’s the easiest piece of hair advice we will ever give you: Use the above tutorial to create a basic wrapped chignon, but shift your middle ponytail to the side of your head before beginning. Use smaller side pieces to wrap around the base of the bun. What can we say, other than “instant wedding updo”? 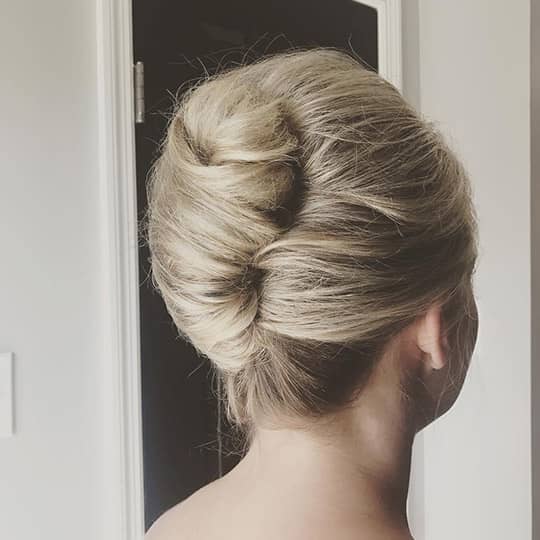 The French twist has gotten a bad rap in recent years for being unflattering or outdated, but we’re still big fans of the style for formal events. The trick is to apply texturizing spray or product with grip before beginning to roll the hair into the head. Instead of losing strands as you go, you’ll be pleasantly surprised at how simple the style can be to complete. 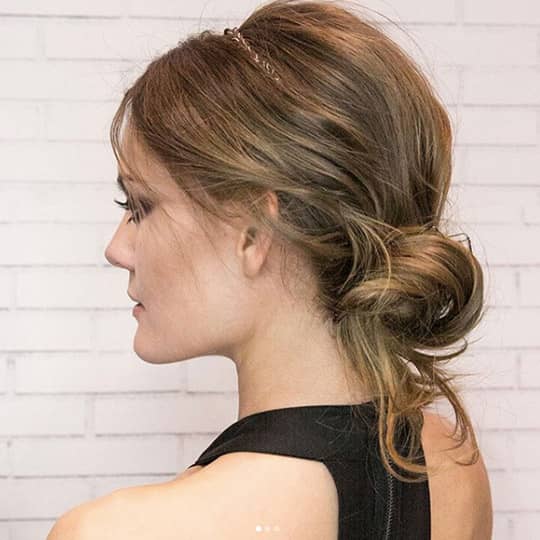 We originally found this hack on Pinterest, the ultimate source for all things DIY. Instead of wasting your time pinning and spraying your head, fake a chignon by tucking hair into a bedazzled elastic headband. This is a more casual style, meant for nights in or weekday events. 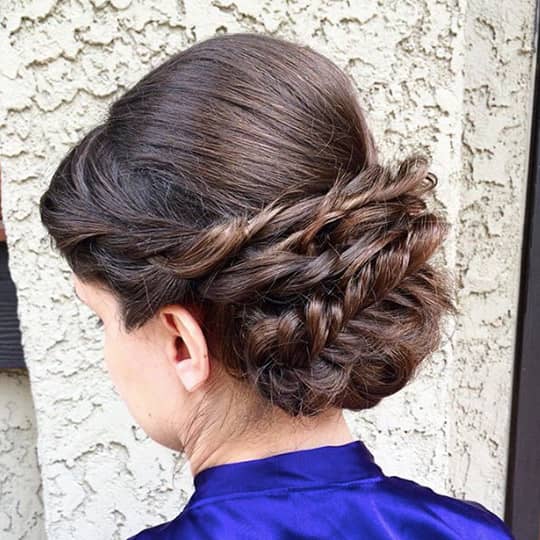 Here’s another look for ladies who have too much hair to simply tuck up into a bun. Try the fishtail braid chignon, creating the braid at the nape of the neck before fastening it with a no-show hairband. Then, wrap the braid into a bun shape and pin it securely. Pancake the braid as much as you’d like, coating the final product with a layer of hairspray to prevent flyaways. 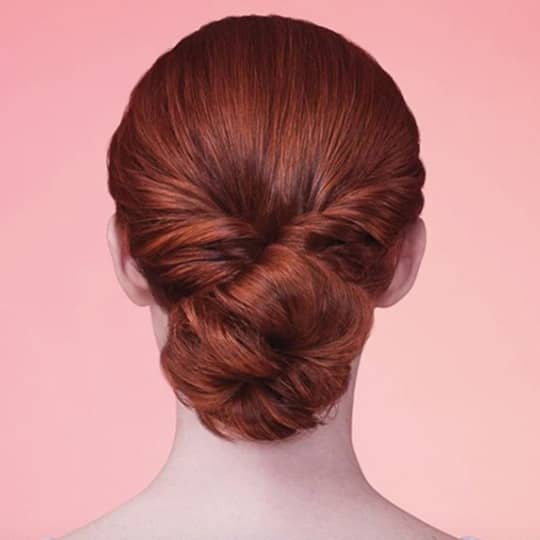 For a daytime party or brunch, we love the look of a very laid-back chignon. There are a few ways to use a topsy tail as the starting point to your bun, but it’s the first few steps are the same no matter your finished product. Create a ponytail, then use your finger to pull it over and down through the hair directly above the hairband.

Once you have the requisite twist, either repeat the process with your ponytail until there’s no hair left or create a bun directly below the hairband. 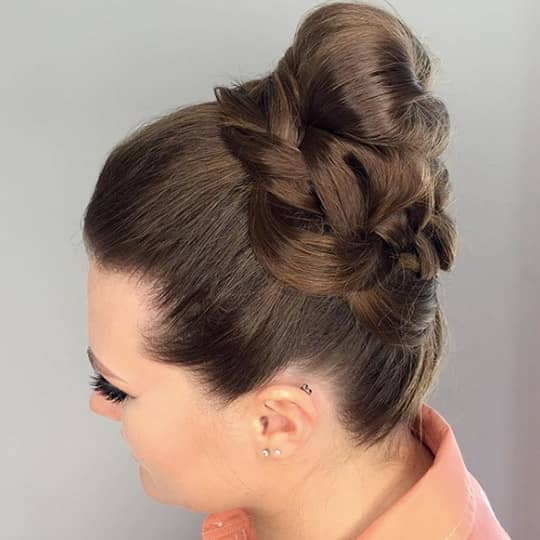 Contrary to popular belief, a chignon doesn’t have to sit on the neck to qualify. Create your high chignon—a great fit for a formal wedding, by the way—by brushing your hair into a high ponytail. Backcomb the tail, leaving out a small piece at the bottom, smoothing and folding it up into a fan shape. Once you have the main portion pinned the way you’d like it, wrap and pin the second strand around the base of the ponytail. 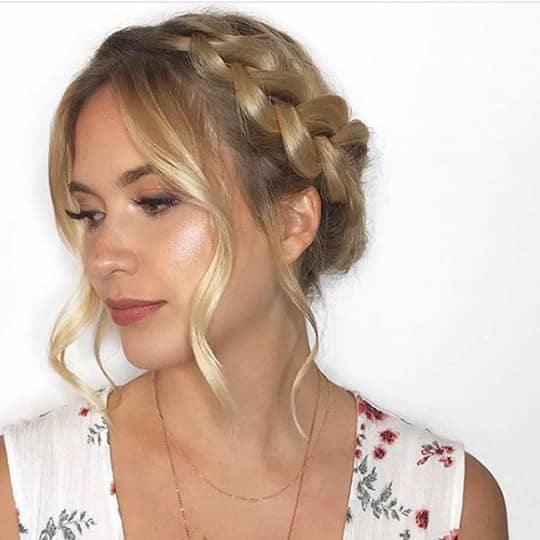 Once more, you’ll be following our basic chignon tutorial to make your bun. To begin, however, you’ll make a deep part and French braid away from it along the hairline. At the ear, transition into a traditional braid. Once you’ve finished the plait, braid your strand on the other side. Wrap these braids around the base of your bun. 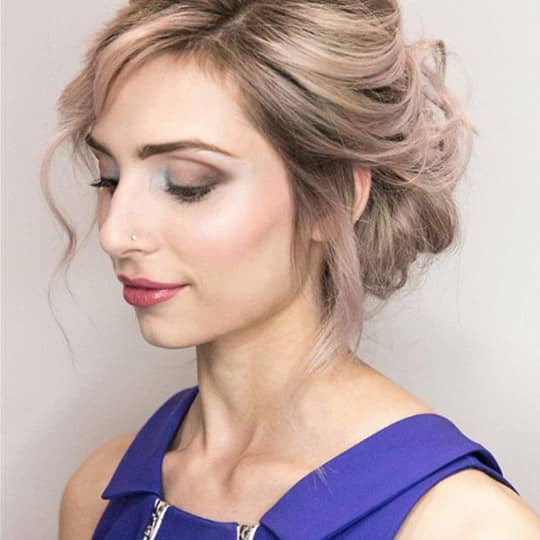 If you’re looking for a way to keep your hair out of your face while shopping or out on the town, look no further than the messy chignon. Start with second day or texture-sprayed locks, gathering them into a loose ponytail held with one of your hands. Starting from your ends, roll up the hair as tightly as possible, pinning the hair to the base of your head. This is all the chic French girl vibes, none of the work. 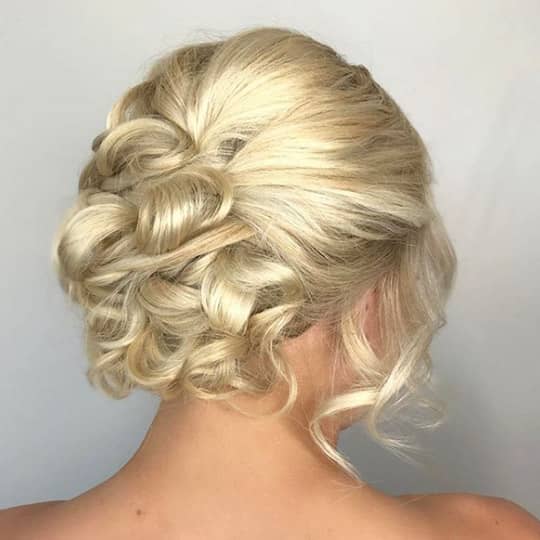 We feel real empathy for the curly, short-haired and textured girls, the ones that get left out of every updo tutorial. We’ve got you covered, ladies. Use your natural texture to create a lovely chignon.

Instead of trying for a ponytail, start at the crown of the head. Twist and pin two-inch chunks of hair to the base of the neck. Aim for a loose bun shape, but don’t be afraid to keep your curls intact. 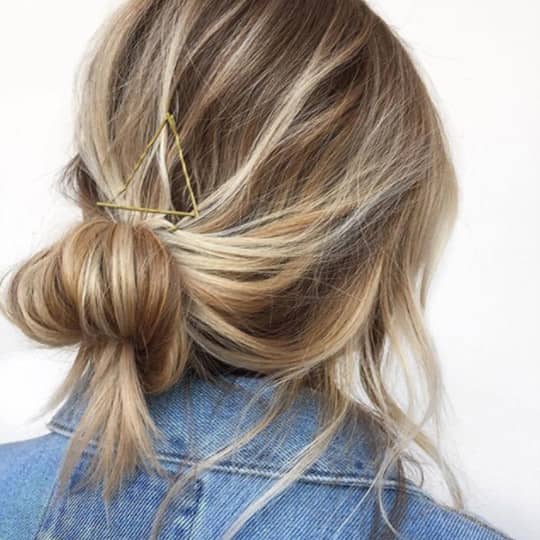 Although the name is anything but sexy, the banana bun is the newest cool-girl hairstyle to take the internet by storm. To create this look, use our basic chignon as a rough tutorial. Instead of using your middle section for a bun, however, you’ll create a ponytail that’s only half pulled through the hairband. Wrap your outer strands around the messy bun you’ve created. 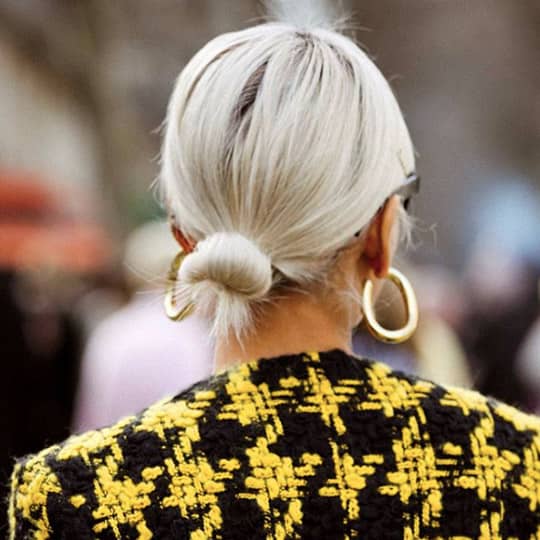 Here’s another incredibly simple style for a night out, a casual wedding, or a dinner with friends, one that works particularly well on ladies with straight, sleek hair that doesn’t hold curls well. Instead of fighting your natural texture, smooth your hair into a low ponytail.

After securing your tail, divide it into two sections and use them to make a simple knot. Then, make a second knot—assuming you have enough length to do so. Tucking in the ends of your ponytail, create a bun shape and pin your hair in place. Feel free to fluff your knots for an extra casual vibe. 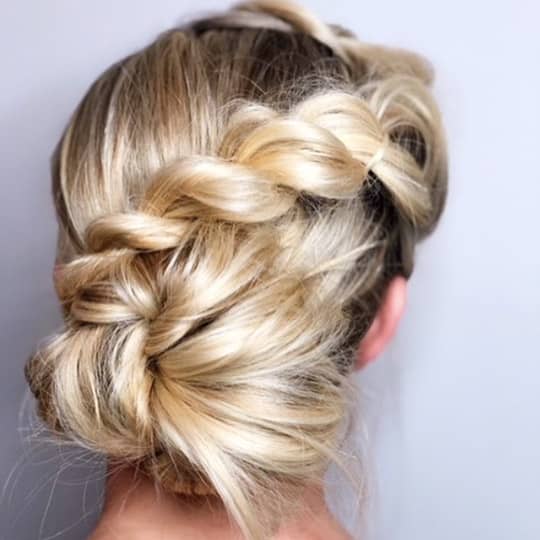 We’re huge fans of hairstyles that only look complicated—pulling dozens of bobby pins out of your hair after a major event is so 1982. For an outdoor wedding or casually glam event, try this updo trick: Create a middle or side part, then fishtail braid your hair from the nape of the neck to the ends. After wrapping an elastic around the braid, pancake it.

Next, you’ll want to pull the braid up toward your scalp (imagine it like a French twist), tucking the end of the ponytail out of sight before pinning the whole thing into place. You’ll keep the face-flattering look of a loose braid, but keep the fashionable chignon. It’s the best of both worlds.